Opportunities in the Wake of COVID-19

During the April 30 webinar, the AMG team focused on investment opportunities in light of the damage the COVID-19 pandemic has caused to the U.S. economy.

Click the “Play” Arrow on the image above to view our 4/30 webinar recording.

WEBINAR SUMMARY: Opportunities in the Wake of COVID-19

AMG offers tips on where to prospect for gems as U.S. economy starts reopening.

AMG National Trust sees several investment opportunities emerging in the coming months as America gets back to business following the COVID-19 economic lockdown.

Those areas are more likely to provide better returns as the United States and the world slowly reopen parts of the global economy over the next two months. But keep in mind that while stock markets have bounced back nicely since the March 23 crash, the coming weeks are likely to be volatile.

“Markets are still in the bottoming process … that likely means we might test the bottom, but we probably won’t go below it,” said Josh Stevens, AMG’s Senior Vice President-Investment Group. His comments came during AMG’s April 30 Insights briefing on the pandemic’s economic impact. Click here to watch the video.

Bad economic news will roll in over the coming months, keeping markets jittery and unlikely to mount a sustained climb. Just this week, new government estimates showed real GDP in the first quarter slid an annualized 4.8% after four quarters of solid growth in 2019.

Dr. Michael Bergmann, AMG’s Senior Executive VP and Economist, estimates that dip will be well over 25% annualized in the second quarter — the worst in U.S. history.

“The next 60 days will test our courage as investors,” said Earl Wright, AMG’s Chairman.

Buoying markets is encouraging news in the global crusade against COVID-19, which, in less than five months, has infected at least 3.2 million people and killed 230,000 — over 60,000 in the United States alone. Here’s the latest: 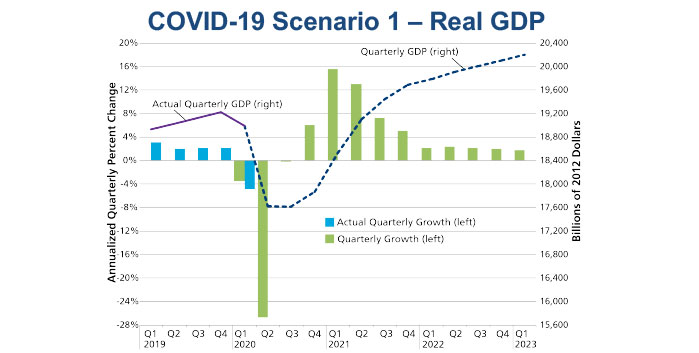 All of this news matches up with AMG’s base-case scenario for economic recovery, which estimates normal growth patterns won’t return until 2022. In 2021, AMG sees quarterly growth showing some startling double-digit numbers as the economy revs back to life, returns to nearly full production, and recovers from the COVID-19 downturn.

“The bottom line is that the Fed is willing to do whatever it takes,” Dr. Bergmann said, “while Congress and the administration are not far behind in using monetary and fiscal tools; first, to act as a lifeline that keeps financial markets functioning, and households and businesses solvent in the near term; and then second, to provide economic stimulus as a recovery in production takes hold.”

That bodes well for investors.

AMG research has identified three areas of public market opportunity coming out of this crisis.

In addition, equities in several market sectors are deeply discounted right now: primarily energy and financial, but also industrial and materials. Talk to an AMG advisor for more information about specific investment opportunities.

If the United States and the world can avoid a big second wave of COVID-19 infections causing a retightening of economic restrictions, the outlook for a 2021 economic recovery looks good.

“At the moment, most of the financial markets are focused on finding the bottom in corporate profits and economic activity, and then looking at the path to recovery,” Stevens said.

Low interest rates, easy-money policies, and federal relief efforts probably will continue for at least the next 12 to 24 months, which should make it a good time for investment.

But all the government’s deficit spending to combat the pandemic raises the specter of a ballooning national debt and its inflationary pull.

“We don’t have anything to worry about in the short-run,” said Dr. Bergmann, “but it is obviously a potential long-term issue.”

Corporations also could be competing for capital against a vastly expanded U.S. bond market, which finances the federal debt. That could cause higher interest rates, less capital investment in free enterprise, and less growth in the economy, Wright said.

“Interest rates are really low right now,” said Wright, “but if the cost of the federal debt was approximately 5%, our current interest payments would go from 5% to 20% of the federal budget.”

Inflation also eventually could become a problem, Wright said, but not for the next two to three years as the Federal Reserve floods the economy with cash to ensure the recovery continues.

“Regardless,” he said, “it would suggest you want to invest accordingly: in equities and real assets to protect against inflation.”