Will the War in Ukraine be “Short & Contained” or “Long & Sustained”? 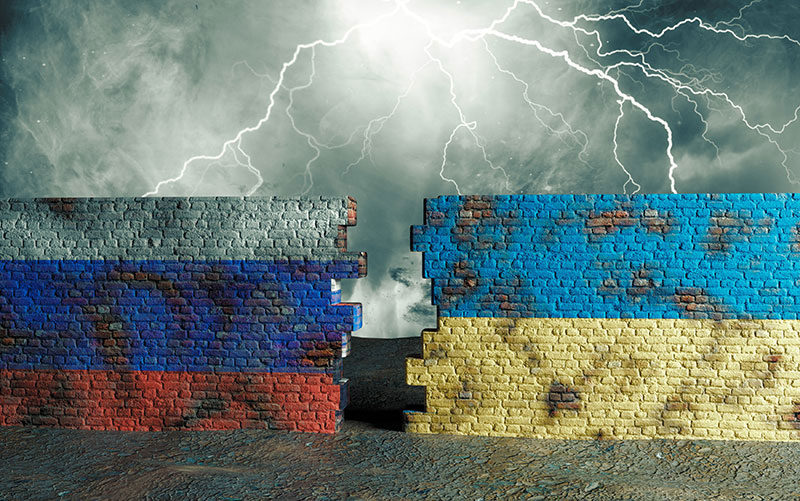 The invasion of Ukraine is a tragedy affecting many lives, and will have ripple effects through the global economy and financial markets.

Key Takeaways on the War in Ukraine

The risk of a recession in Europe is rising, but the U.S. and other regions around the world are likely to be relatively insulated with no global recession currently expected. However, if the spillover effects from conflict in Ukraine were to materially slow down global growth, central banks could have to confront a form of stagflation: declining growth at a time of rising prices.

There are two broad ways to evaluate the war in Ukraine – is the war “local & limited” or “substantial (meaning beyond Ukraine) & lasting”?

Russia has invaded Ukraine in the first major European land war since World War II. Geopolitical risks are difficult to assess, especially once they escalate to military operations. Currently, Russian President Putin seems intent on utilizing high oil prices and the strong fiscal position of Russia to expand its sphere of influence into Europe. Russia’s invasion of Ukraine will challenge the European security apparatus and continue to pressure NATO. Significant economic sanctions on Russia—particularly if aimed with purpose at energy and banking—are likely to have spillover effects that raise the risk of a recession in Europe.

The rapid escalation of geopolitical conflict at the Euro Area’s eastern border poses risks to an economy already confronting soaring energy prices and snarled supply chains. The Russian military incursion and additional sanctions from the United States and Europe could extend the global economic turmoil and policy uncertainty, which in turn could further disrupt oil-and-gas supplies, aggravating inflationary pressures in Europe and beyond.

European policymakers have a test ahead of them, balancing their response to Russia (i.e. sanctions) with the challenges related to energy and trade.

How Might A War In Ukraine Impact Global Economic Outlook?

Three Possible Paths Forward, Dictated Mostly By Energy
The Russian economy is the “crater of most direct economic impact” from the military conflict in Ukraine; Russian currency has plummeted, its central bank hiked its key policy interest rate to 20% on Monday, air traffic and many of its supply chains are at an effective standstill. The second ring of the impact crater is expected to be the Euro Area, with the U.S. experiencing mild-to-moderate aftershocks.

1. Sanctions May Cut Both Ways

With the announcement of additional sanctions in response to the Russian invasion of Ukraine, the short-term economic outlook for the Euro Area is highly uncertain. Considering Russia’s apparent willingness to escalate military aggression, retaliatory efforts on European energy and cyber security cannot be ruled out. The accompanying uncertainty has the potential to harm Europe’s recovery at its weakest points: energy prices and supply chain logistics.

Many Euro Area economies have direct trade ties with Russia, with about 0.8% of European Union (EU) economic activity directly linked to Russian imports of intermediate and final products. An additional 0.5% of EU output relies directly on inputs from Russia, with Eastern Europe particularly exposed.

Although at first glance these values may appear to be small, first-order links understate the rippling effects when intermediate goods—like machine components—become delayed or unavailable to firms that require them in the production process and do not have near-substitutes. Germany’s economy (Russia’s largest European trading partner) is particularly vulnerable, followed by Belarus, the United Kingdom, Turkey, and Italy.

3. European Dependence on Russian Energy at a Time of Elevated Inflation Complicates the Policy Outlook

Europe’s heavy reliance on Russian energy supplies constitutes another major risk, as European manufacturers face soaring energy costs in addition to snarled trade with Russia. Wholesale gas prices are nearly four times higher than a year ago, and although energy inputs represent less than 3.0% of the total value of manufacturing output in the EU, the impact is much higher for producers of many intermediate inputs—basic metals, chemicals, glass, and cement.

Energy price pressures in the Euro Area caused inflation to soar to record highs even before the invasion of Ukraine, contributing nearly 2.8 percentage points to the 5.1% headline inflation rate seen in January.

4. A Spike in Energy Prices Raises the Risk of Mild Recession

Before the conflict in Ukraine escalated, real GDP in the Euro Area was on track to moderately expand during the first quarter of 2022. If energy flow interruptions impair industrial production, combined with the unresolved disruption to global supply chains, the region is at risk of a mild recession.

The invasion of Ukraine may delay the conditions needed for the European Central Bank (ECB) to begin normalizing monetary policy, though 2023 remains the most likely time frame. With the risks to inflation expectations swinging to the upside as a result of the geopolitics around long-term energy pricing in the region, the ECB will likely want to keep its options open.

Historically, the equity markets—domestic and abroad—have had two responses to geopolitical risks.

Presently, we think the most likely course is that markets will follow the scenario of short and contained, unless additional sanctions on banking and energy are introduced. This implies the normal valuation discount for European stocks will persist and markets should recover to prior levels, all else equal. However, the war is escalating quickly, and the extent of the war may lead to a more sustained shift in the European approach to military and economic security. This could result in longer-term reduced valuations of European stocks, creating an even larger and more persistent discount relative to U.S. stocks. In the coming weeks we should be able to tell whether or not Russia’s invasion of Ukraine will remain localized—in which case European markets recover—or spill over, creating a more substantial discount for European equities relative to U.S. markets.

A spike in energy and broad commodity prices has concerned markets for much of this year. While Europe and the United States have not engaged in energy sanctions against Russia yet, if they do, Russia will look for other customers—commodities operate in a global market after all. Energy and other commodity prices are likely to remain volatile as risks to the established order for global commodity trading remains in jeopardy, putting further pressure on the global economy.

Fundamentals and valuations for European stocks have both been attractive, but risks are now highly elevated. In the fourth quarter of 2021, European stock earnings continued to surprise to the upside of forecasts and outpaced the profit recovery in the United States. Additionally, valuations are very cheap when compared to U.S. stocks, and the ECB is likely to keep key supportive policies in place longer than otherwise expected to mitigate adverse effects from conflict. However, the risks of a European recession—as a result of additional sanctions on Russia or in response to an extended war that envelops Ukraine and pressures Europe’s energy security and banking sector—are quite real. For now, the situation in Europe remains in a major state of flux.