The Economic Impact of COVID-19 on Advanced Economies Advanced economies have been hit hard by COVID-19 but economic recovery is expected.

The hope of containing COVID-19 and the pandemic’s social and economic impact quickly faded within the first few weeks of March. The virus had already spread across the world, so developed countries sought to mitigate its effect on their healthcare systems and economies by whipping up different blends of travel bans and restrictions, social distancing measures, quarantines and lockdowns.

To date, the cost of COVID-19 and countermeasures deployed is immense. Over 1 million lives have been lost so far. Global production and trade have been disrupted, perhaps with long-lasting consequences. Millions of people are unemployed, some in roles that may not quickly recover. Global debt has exploded to levels not seen since World War II.

Now that the strictest lockdowns have been lifted, major developed countries are carefully making an economic recovery. While we may not know the long-term social, economic and geopolitical impact for some time, the near-term economic remedy will continue to be loose monetary policies and discretionary fiscal policies as we race toward an effective and safe vaccine.

In 2020, Global Economies Fell Off A Cliff

The COVID-19 pandemic and the strict protocols put in place to contain it wiped out any potential for global economic growth this year. Many developed nations experienced deep recessions with record drops in quarterly real GDP.

The four largest Euro Area members—France, Germany, Italy and Spain—all recorded double-digit drops in real GDP during the second quarter. The United Kingdom took the crown for the worst second-quarter drop (20.4%) of all major advanced economies (Figure 2). On the other hand, the U.S. economy has been more resilient to the economic side effects of the lockdowns, dropping 7.4% (Figure 2).

Rise in Unemployment Rates Due to Covid-19 Containment Measures

While the U.S. economy may have performed better than those of most other developed countries, the United States has not been so resilient to job losses. The United States had a strong pre-pandemic labor market and an extraordinarily low unemployment rate of 3.5% in December 2019.1 In April 2020, the U.S. unemployment rate peaked at 14.7%,2 which is much higher than the unemployment levels seen during the 2008 Great Recession. Other countries with perhaps less flexible labor markets—where employees are more contracted than “at-will”—saw much lower changes in employment. The 11.2% increase in unemployment that the United States suffered was greatest with Canada’s 8.2% close behind (Figure 4).

Since July, a little over half of the 22 million jobs lost have been recovered in the United States. Many “non-essential” workers (e.g. waiters, fitness trainers, childcare workers) are trying to make their way back to positions that have mostly evaporated. In the United States, women workers accounted for 50.04%3 of the labor force in December 2019 and dominated these service industries. Now, women are suffering from a higher unemployment rate than men, which is why some are calling the U.S. recession a “she-cession.”

In France, young workers, who were already suffering from high unemployment for over a decade, were most affected.4 While in Australia, it was the young and old workers who suffered the worst job cuts in the spring.5 But the overall global situation is that low-income communities have taken the brunt of the economic fallout from the pandemic.

Spaghetti on the Wall: Experimental Monetary and Fiscal Stimulus

Never having been faced with a global pandemic of this magnitude in modern times, governments were flying blind as they braced their economies with aggressive expansionary monetary and fiscal stimulus.

Policymakers in developed countries provided a fiscal boost through COVID-19 relief packages that included direct payments to struggling households and businesses, tax deferrals and reductions, low-cost loans, and health-system support. Government officials have thrown out spending caps and budgets as they’ve pledged to take on tremendous amounts of debt worth billions of dollars… sometimes even trillions!

To date, the U.S. government has approved $2.59 trillion in COVID-relief stimulus, the largest of the major developed nations in dollar terms.6 Although eye-popping in the absolute, this stimulus spending only represents 12.1% of 2019 GDP, as the United States is the world’s largest economy. In comparison, the other developed countries have smaller economies so smaller fiscal boosts will actually make up a greater proportion of 2019 GDP (e.g. Japan 43.3%, Germany 40.1% and Italy 34.0%) (Figure 5). 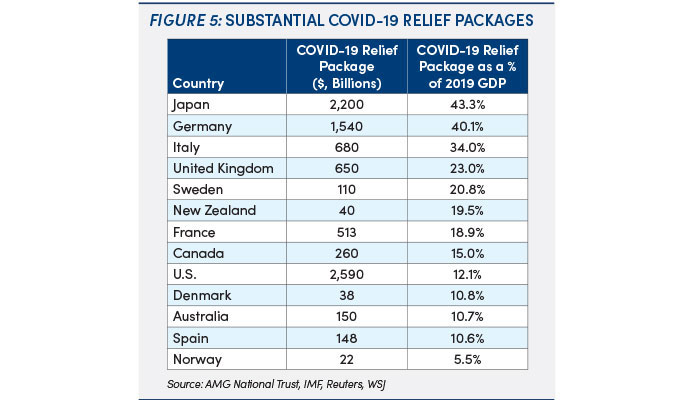 Another Round of Stimulus

Monetary authorities are monitoring the economic landscape in their countries closely and will continue tapping into all their tools and extending policies as necessary.

But for the United States, additional fiscal stimulus is becoming more politically difficult. A new round of fiscal spending is stuck in negotiations between the House and the Senate, with politics now incentivizing a stalemate until the outcome of the November election is known.7

On the other hand, the Federal Reserve (Fed) of the United States reiterated its commitment to supporting the economic recovery for “as long as it takes” during a September testimony to Congress.8 The Fed extended its emergency credit programs known as “section 13(3) programs” to the end of this year, dollar swap lines and repo facilities with foreign central banks to March 31, 2021, and ZIRP (zero interest rate policy) till 2023. These have cumulatively led to the Fed balance sheet forecasted to exceed $8 trillion by year-end, which would be double the amount from the start of 2020.9

This is a concerning trend for developed countries as taking on more public debt will put these countries at greater risk for long-term fiscal challenges (e.g. reduced public and private investment, less fiscal flexibility due to a high level of public debt) that can diminish future economic growth.12

Yet there is evidence that fiscal stimulus helped cushion the economic blow through the summer and its effects are waning as many of these programs are ending. There is no magic formula that can tell us exactly how much fiscal stimulus is enough to get developed countries through this crisis. But as long as there’s a pandemic, developed countries will likely take on more debt to support their economies.

Now that the strictest lockdowns have been lifted, major developed countries are carefully making an economic recovery, the shape of which—V, K or “swoosh”—is still being debated. European countries such as France, Italy, Spain and the United Kingdom are projected to have a short, sharp collapse and recovery (V-shaped) compared to the United States, Australia, Japan and Sweden, which are forecasted to have a large drop followed by a much slower and painful recovery to pre-COVID levels of economic activity (swoosh). If one considers the uneven distribution of the recovery among classes of workers, one can make a case that the aggregate statistics mask rising social and economic inequality (a K-shaped recovery).

If developed countries had a choice, a V-shaped recovery looks more appealing as the underlying goal is to recover as quickly as possible to pre-pandemic economic growth. Nevertheless, these projections will remain volatile as long as the pandemic persists.