Investors angling for returns need to know the best fishing spots as the world recovers from the pandemic and the economy’s Great Shutdown.

The economic horizon is clearing, and AMG sees opportunities for savvy investors in the months and years to come.

How quickly the economy recovers mainly depends on the speed of the COVID-19 vaccine rollout, which has been bumpy at times, but the outlook is positive, AMG Chairman Earl Wright said Jan. 26 during the webinar Assessing the Road Ahead: 2021, 2022 & Beyond. Watch the video here.

Despite the lingering pandemic’s drag on the economy, AMG experts noted numerous signs that the recovery likely will continue its upward climb:

“There are opportunities out there,” Wright said, but you can’t just toss out a net – you need to know where to fish. “From an investing standpoint, we see some sweet spots.”

To that end, AMG has developed seven possible economic scenarios to help guide investors in allocating their portfolios, depending on their expectations and tolerance for risk. 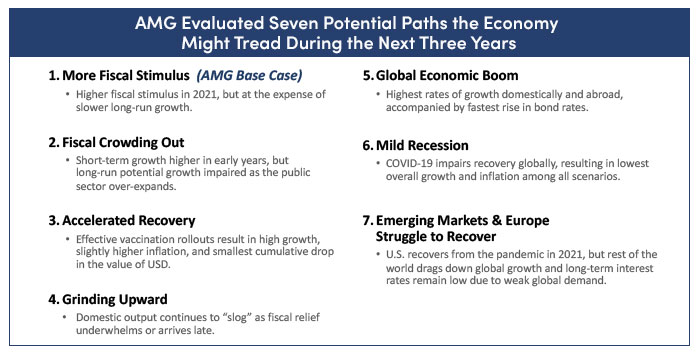 “Under all the scenarios, the economy eventually recovers – but not all recoveries are equal,” said Alex Musatov, AMG’s Global Research Economist. The most probable scenario, or the Base Case, envisions the economy trending upward over the 2021-2023 period as the gap in output that resulted from the COVID-19-induced recession is eliminated.

“The economy has made great strides since the trough of the recession (last summer),” Musatov said, but more recently (November through January) the speed of the recovery appears to have plateaued as pandemic infections, hospitalizations and deaths have spiked.

“Though keep in mind that mass vaccinations were not yet underway,” he said. “This acts as a stark reminder that the economy to some degree remains at the whim of the virus.”

But the economy should begin climbing again as more and more Americans are vaccinated and as government stimulus efforts kick in. A $900 billion program approved in late December is only now starting to have an impact, and another $1.9 trillion has been proposed. AMG expects this package to be whittled down to around $1.1 trillion before being approved, probably by mid-March.

All of this stimulus is a key reason that savvy investors should be optimistic and trolling for new opportunities. 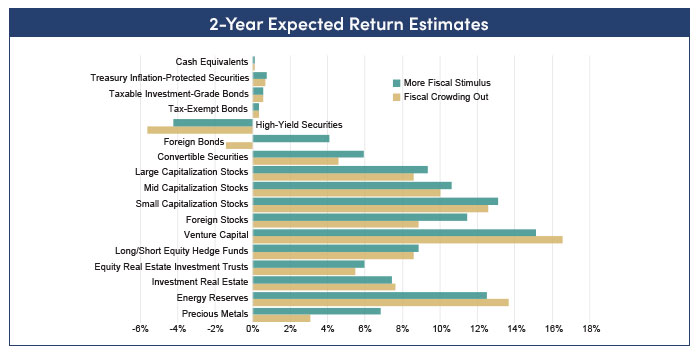 “We estimate annualized expected return, in the probability sense, for every asset class and scenario over two years,” said AMG Economist and Co-Founder Dr. Michael Bergmann. “What’s striking is how intuitively normal the pattern of expected returns looks” for AMG’s Base Case scenario (More Fiscal Stimulus) and the Fiscal Crowding Out scenario, which has much higher levels of fiscal stimulus.

“Equities and alternatives, like venture capital, real estate, and energy, appear to have relatively decent expected returns,” Bergmann said. “That makes sense given the scenarios’ outlook for strong economic growth and a still-subdued interest rate environment for the next two years. Keep in mind that the adverse effects of excess fiscal stimulus and taxes won’t kick in until late in the scenarios’ projection period.”

“Equities that are likely to perform well in coming months are small- and mid-cap companies, both domestic and foreign,” said Josh Stevens, senior vice president, AMG Capital Management. Value stocks also show advantages in this environment relative to growth stocks. Large-cap and growth stocks like Amazon, Facebook and Netflix have carried markets to record highs during the pandemic and recession. But going forward, smaller companies appear to have the most potential for returns.

The formula for success depends on vaccinations and economic stimulus. The countries that do both are likely to see their economies and markets recover more quickly. Stevens said countries in the best position should be those that vaccinate a majority of their populations by the fourth quarter of this year.

“Mobilization of consumers is key,” he said, noting two caveats. Several countries have already moved higher and now discount a successful handling of COVID-19 as well as substantial fiscal stimulus. Stock markets in these countries – like China and South Korea– may actually lag behind the rest as their growth decelerates from the end of 2020. Also, poorer commodity exporters in the emerging world may surge in 2021 despite a lack of adequate vaccines and fiscal stimulus as the entirety of the global economy comes back online and demands more of their raw materials.

During the pandemic, some companies, like Shopify, have experienced a sustainable acceleration as retail continues to move from brick-and-mortar stores to online shopping, he said. Others, like food-delivery services, are likely to diminish as COVID-19 is tamed and customers return to sit-down restaurants.

But technology will continue to transform industry, particularly in the fields of health and medicine, software and automation, and interactive entertainment.

Energy is another promising sector where a recovery is well underway, Jacoby pointed out. Demand is expected to accelerate in the second quarter as the global economy reawakens from the pandemic-induced Great Shutdown. Rig count in the United States alone is up 48% from its low in August 2020.

“Owning oil in the ground via royalty acquisitions is attractive,” Jacoby said, compared to exploration and drilling, which might be subjected to increased U.S. regulations.