China’s supersized appetite for energy continues to grow as it looks for more and more energy sources to transition from a middle-income to an upper-income economy.

Coal has been able to power China’s economic success until now. In the past decade, China has burned more coal than the rest of the world combined. But due to coal’s detrimental impact on the environment and health, China is looking for alternative energy sources. Most of those alternatives are outside of China.

To that end, President Xi Jinping launched the Belt and Road Initiative (BRI) in late 2013 to build a massive infrastructure network linking China’s 1.4 billion people to the world and securing new sources of energy for its economic ascension. Among other goals, the BRI includes building oil and natural gas pipelines to central Asia and Europe, creating a telecommunications infrastructure in participating nations, and constructing seaports to open underdeveloped countries to resource development. 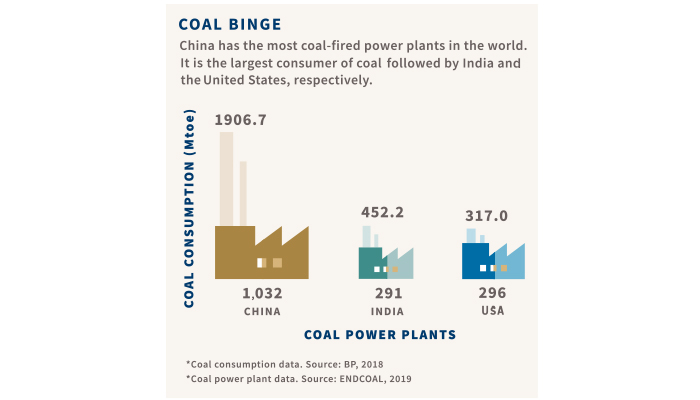 But the coal binge has had a downside. China has become the world’s largest polluter. And that has been devastating to the environment and the health of the Chinese, not to mention economically taxing.

Take Beijing, China’s sprawling capital. The metropolis was home to four major coal power plants for almost six decades.3 These power plants generated enough electricity to urbanize over 20 million Chinese and initiated China’s economic boom. Beijing now has the largest number of Fortune Global 500 companies in the nation and is headquarters for most Chinese SOEs.4 However, Beijing’s extensive coal burning power plants have led to its notorious air pollution problem. Thick smog has smothered the city for the past decade, leading citizens to wear facemasks for protection. 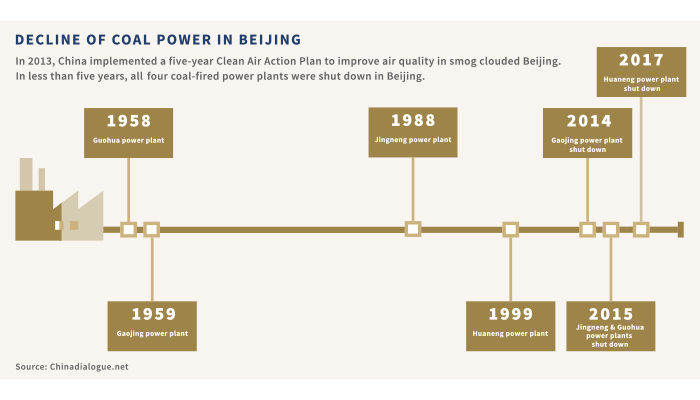 China’s coal-fueled industrialization over the past three decades has come at the expense of public health and future growth. Every year, over one million deaths are linked to fine particles known as PM 2.5, which are created by burning coal.5 These premature deaths are associated to lung cancer, strokes, heart disease and a rise in miscarriages.6

Premature deaths along with a Chinese population destined to shrink because of China’s “one-child” policy—is a formula for constraining Chinese growth, making it even more difficult for China to achieve its annual economic growth target of at least 5% moving forward. Thanks to coal, China may grow even older before it gets rich.

To combat China’s deteriorating air quality, it began by shutting down all four coal-fired power plants in Beijing. Huaneng power plant was the last of the four to cease operations in 2017.7 Beijing was forced to become the first Chinese city to rely purely on cleaner energy such as natural gas for electricity.8 It’s been expensive.

While coal is the cheapest source of energy and is still the major fuel of the Chinese economy, it’s appetite for the dirtiest of the fossil fuels is on the decline. So far, China has been meeting its consumption target of 4.0-4.1 billion tons of coal for the 2016-2020 period.9  It plans to reduce that target even further to 3.0-3.5 billion tons by 2050, which means coal will account for a third of China’s energy blend in 2050.10 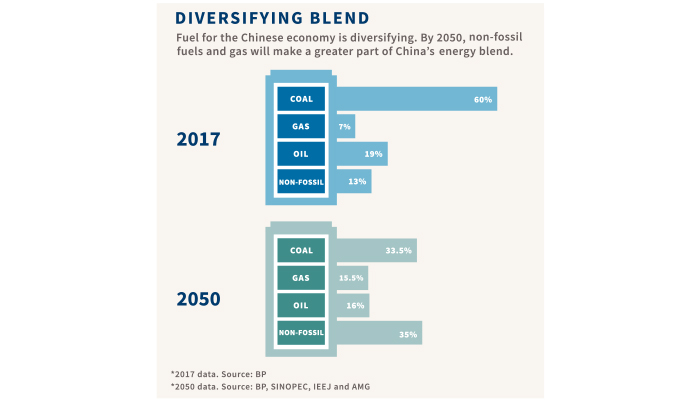 This suggests coal will continue to impose a serious threat to both the environment and Chinese growth.11 In 2010 alone, the cost of environmental damages was worth roughly 3.5% of China’s gross domestic product (GDP).12 Consequently, coal will no longer be China’s preferred energy source.

China’s growing war on pollution is transforming its growing appetite for energy. In order to grow its economy sustainably, China has been looking for new and cleaner sources, including nuclear, hydro and other renewables. These fuels along with natural gas are essential to securing China’s future energy needs.

Natural gas is cleaner, lower in carbon emissions and easier to use. China has ongoing policies to move its residential, industrial and power sectors from coal to gas—and it’s working. In 2018, Beijing consumed a record 280.3 billion cubic meters (bcm) of natural gas, up almost 20% from 2017.13

China has also been turning toward nuclear power and renewables. It has more than 40 nuclear power reactors and a dozen more are in the works.14 At this pace, China will surpass the United States by 2030 as the globe’s top nuclear-energy producer.15 In 2017, China made nearly half of the world’s renewable-energy investments—more than $100 billion, more than double that of the United States.16 By 2050, natural gas and non-fossil fuel sources will constitute to a little over half of China’s energy consumption.

As China goes green, it also plans on becoming the future of electric cars. China has invested more than $50 billion to build its booming electric-car empire over the last decade.17 Its investments have already surpassed every other country. Last year, China sold more electric cars domestically than the rest of the world combined.18

China plans to continue pouring billions of dollars into its electric-vehicle industry in the coming decades.19 If it goes as planned, China’s roads will be filled with only electric buses and cars by 2050. China’s electric vehicles mean cleaner air and more importantly, lower dependence on foreign oil.

However, China will not lose its appetite for oil that easily. Despite efforts to modernize the Chinese economy with resource-efficient transportation systems, China has been importing more oil. In less than a decade, its oil imports have nearly doubled from 4,766.66 barrel/day in 2010 to 9,261.414 barrel/day in 2018.20 China currently has over 40 oil trade partners across Europe, the former Soviet Union, the Middle East, Asia, Africa and the Americas, an increase of 13 partners from 2010.21

China will continue to rely on oil as an essential energy source. In 30 years, oil will still account for almost a fifth of China’s energy mix.22 But why would China still need that much oil in 2050 when it’s ditching gasoline-fueled vehicles?

From jet fuel to asphalt, toothpaste, shampoo, perfume, clothes, dishes, refrigerators and even aspirin, oil is in nearly everything we use. With over 6,000 products made from petroleum, oil will continue to be crucial for China’s modernizing industry and growing middle-class spenders.23

Securing the Future with the BRI 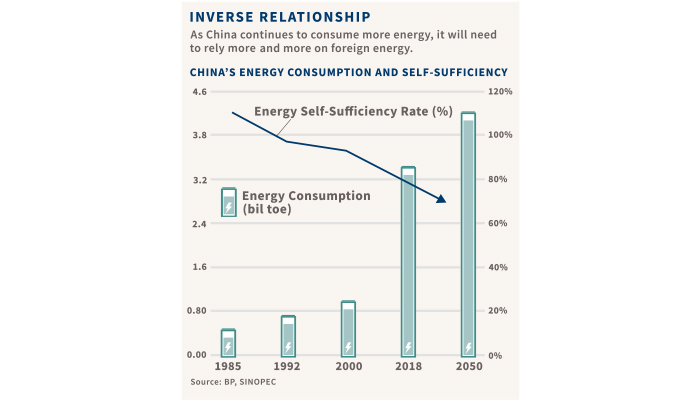 With total energy demand to peak around 2035-2045 at more than 4 billion tonne of oil (billion toe), Chinese growth will continue to become more and more dependent on foreign energy for the next half-century.24 Consider the following:

So China has a big problem. To steer clear of the middle-income trap—which is when the growth of a fast-developing nation stagnates—it must grow its GDP annually by at least 5%. This means as China continues to consume and needs additional energy sources, it will need to grapple with volatile energy markets and overseas political instability. This translates into Chinese growth that is highly vulnerable to international conflict.

Last year’s attacks on Saudi Arabian oil facilities are a good example. The strikes ceased half of the kingdom’s oil production, driving global oil prices up by 10% to $65 a barrel.27 That is a hefty price to pay when your country consumes more than 8 million barrels (MMbbls) of imported oil every day. Expensive oil means an expensive cost to grow GDP at 5% or higher.

China’s future growth is tied to energy security, international cooperation and trade interconnectivity. So, how can it secure guaranteed access to energy? The Belt and Road Initiative.

The BRI will connect China to energy-rich countries across Asia, Europe, the Middle East, Africa and Latin America. This will require oil pipelines running from new seaports to inland China, Chinese naval bases throughout the Indian Ocean to protect shipping lanes, and intercontinental railroads and highways that would connect China to more than 70% of the world’s energy reserves.

This interconnectivity means securing borders and keeping your neighbors happy. Friendly neighbors also mean strengthened economic ties and more energy with lower transaction costs. Take China’s relationship with Russia. Their calculated marriage has taken on a romantic turn over the last 10 years thanks to the BRI. The BRI has more than doubled energy trade between the two nations. Beginning late last year, Russia began exporting natural gas to China that will be worth $400 billion over the next 30 years.28

With more than 11,000 BRI projects underway, new power plants and pipelines are sprouting up everywhere in developing countries. Many Chinese engineers and laborers with power-plant building expertise are facing a declining coal industry at home. But the BRI will supply these workers with a steady stream of coal projects to work on abroad.

A network of pipelines will support the movement of natural gas from gas-rich countries such as Russia and Turkmenistan through Central Asia to China. More pipelines will make the transportation of natural gas across Eurasia to China more efficient. Currently, China’s intercontinental oil pipeline infrastructure is only beginning to take form. The goal is to have it completed in time for the 100th anniversary of the People’s Republic of China in 2049.

So in the meantime, the BRI is securing China’s maritime transportation routes because it’s still the cheapest way to move energy sources and goods around the world. It’s building new seaports, revitalizing old ones and setting up overseas military bases in developing nations.

New ports will give China greater access to energy in Africa and Latin America. Africa accounts for almost 10% of global oil reserves and Latin America 20%.29 China plans to have a better grasp on 29% of the world’s oil reserves by sprinkling investment sweeteners into those nations’ energy industries. By doing this, China is making more energy-rich friends and gaining access to untapped energy reserves.

The new and revitalized ports in the Indian Ocean will also become safe harbors for China’s rapidly growing military. Djibouti is home to Beijing’s first overseas military base. Why Djibouti? The African nation lies at the gateway of the Suez Canal—one of the world’s busiest shipping routes. China plans to continue adding more military bases around the world to protect its energy supplies, commerce and economic future. China also uses its SOEs to build and manage seaports, which can backfire for host countries.

In 2017, SOE—China Merchants Port Holdings—gained control over a Chinese-built Hambantota port in Sri Lanka for the next 99 years.

For the most part, it seems that China’s quest for energy security is a “win-win” situation. China secures its energy supply and economic future, while emerging nations have Chinese investments to develop their infrastructure and economies. But remember, more energy production around the world means more energy for China. At the end of the day, more roads are leading back to China.

Buckle Up: Market Volatility May be Here to Stay