Time to Worry About Inflation? The Consumer Price Index rose in June ushering in more fears of runaway inflation, but digging into the numbers reveals there’s more to the story.

Indeed, the Consumer Price Index for All Urban Consumers (CPI) jumped 0.9% during the month of June and 5.4% from the same month last year, seemingly accelerating from the prior month. Excluding the volatile food and energy components, the so-called Core CPI rose 0.7% from the previous month, and 4.5% from June 2020. The 4.5% figure represents the largest advance since November 1991, a dubious distinction.

At first blush one may be tempted to conclude that the CPI is accelerating beyond what constitutes transitory price pressures in AMG’s Base Case and economic outlook. Digging into the proverbial weeds, however, strips away some of the headline’s luster.

Of the eight primary categories tracked by the CPI only two contributed over three-fourths of month-over-month and year-over-year increases; both categories are tightly linked to the economy’s reawakening from the Great Shutdown. Transportation (a diverse basket that includes prices of new and used vehicles as well as airfares and taxi services) and Housing (which includes both rents and rent-equivalents for owner-occupied residences) drove an unmistakably outsized portion of the increase in the CPI, as illustrated in the exhibit below: 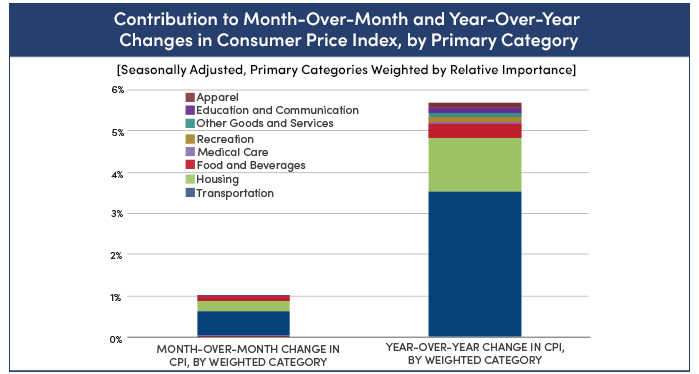 As of June 30, 2021.
Source: Bureau of Labor Statistics, AMG Calculations.

In general, episodes of sustained inflation cause all—or at least most—categories to move in lockstep as the “rising tide of too much money lifts all boats.” Had the month-over-month changes been roughly equivalent across CPI categories, a review of AMG’s outlook might be sensible. That remains not the case, however.

Of the 350+ expenditure sub-categories (which are aggregated into the eight primary CPI categories), 200 experienced zero (or even negative) price change both for month-over-month and year-over-year. In other words, signs of widespread, broad upticks are difficult to find even under a microscope; granted, at this level of granularity one isn’t surprised to learn that “photo processing fees” and “mutton” are not experiencing runaway price increases during 2021.

Will the upticks in Transportation and Housing costs temporarily trickle into the expected rates of inflation which household surveys will capture this quarter? Yes, most certainly. Consumers’ expectations tend to be particularly swayed by changes in prices of big-ticket items, including cars and housing.

Does that mean that households will re-anchor their expectations of the long-term inflation rate at a significantly higher level, beyond a transitory period of post-pandemic normalization? No, that outcome remains as unlikely now as it was before June’s CPI release. The bond market appears to broadly endorse this view, with 10-year and 30-year nominal yields stepping down a couple of basis points upon news of the CPI’s release.

That’s not to say the “Grand Reopening” is finished pummeling the inflation calculus. Inflation risks remain elevated. A fourth wave of COVID-19 in Asia-Pacific is triggering a new round of restrictions in some of the U.S.’s trading partners, potentially delaying the timeline of supply-chain normalization. Scorching heatwaves are reintroducing upside risk to agricultural commodity prices just as many industrial inputs retraced their first-half spike, and although policymakers continue to finetune their toolkit “on the fly,” economic sands keep shifting around them. There is the distinct possibility that the output gap closes earlier than expected and monetary tightening arrives too little, too late.