March Inflation: Spike, Spiral, or Something Else? Would the data released by the U.S. Bureau of Labor Statistics indicate a temporary year-over-year “spike” as March 2021 values were compared against last year’s (when shutdowns were already depressing some prices)? Would the data hint at a runaway “spiral,” with uniform price increases across categories—even those unaffected by the pandemic’s grip? Or would some entirely unexpected narrative emerge from the numbers?

The verdict is in and—though not particularly stirring—it should mollify investors skittish about the prospect of an inflationary bout: base effect “spike” was the main culprit in March.

Yes, the Consumer Price Index (CPI) may have advanced by the most in nearly a decade (0.6% from February to March) and its core measure (which excludes the volatile prices of food and gasoline) climbed the most in seven months, but the upward price pressure came from categories most directly linked to the economy’s reopening: a rebound in travel and commuting pushed up the cost of gasoline, car rentals, and hotel stays, while the price of admission to movies and events saw the largest increase since June 1984. The jump in the cost of gas alone accounted for almost half the overall March increase. Other prices tracked by the index advanced as well but at unalarming rates.

During the twelve months leading up to the pandemic, CPI was increasing at an average annual rate near 2.0% (1.96% to be precise). Had the pandemic not interrupted the underlying trends and CPI continued to advance, the index would likely have followed the blue dotted line, illustrated in the graph below.

COVID lockdowns in March 2020 sent the index on a detour of sorts, one that will now produce a string of startlingly high year-over-year CPI increases (indicated by the red line in the exhibit below). April 2021 and May 2021 releases may cause even bigger whiplash to onlookers; they will be sized up against the trough of last year’s economic paralysis. 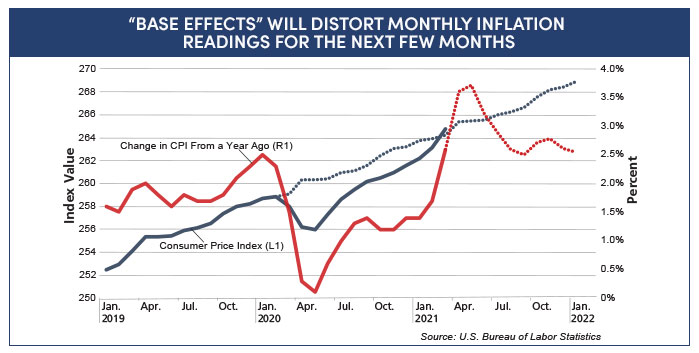 March 2021’s release will surely add fuel to an already heated debate about the path of inflation, especially in the medium-term. To be sure, the outlook for price dynamics remains foggier than normal, with the standard inflation calculus muddied by yet-unfinished government spending, observable global supply chain bottlenecks, widening reports of supply shortages, and increasing input costs reported by both the manufacturing and service sectors.

Returning to our motivating question: “Is this a spike, a spiral, or something else?” the compass of evidence points to a “spike,” which in turn buttresses AMG’s baseline expectation that the Federal Reserve will judge the uptick as transitory, is in turn unlikely to accelerate its tightening schedule, and short-term rates will likely continue hovering near present lows.

Want to Learn More About AMG’s Thoughts on Inflation?

Join us on Thursday, April 29 for Inflation on The Brain: What Should Be Top of Mind?