Specter of Inflation: Soaring federal debts raise concerns about reliving the economic turmoil of 50 years ago

Runaway inflation and interest rates are an unlikely result of the historic public debt being run up by the U.S. government to combat the COVID-19-induced economic recession.

But it could happen. It has before.

So in a few years, if our political leaders aren’t careful, it could be deju vu all over again as Americans relive turbulent economic times last seen a half century ago.

“This reminds me an awful lot of the 1970s,” said AMG National Trust Chairman Earl Wright during the July 9 COVID-19 Briefing webinar. Click here to watch the presentation.

“It seems like we’ve been there before,” added Dr. Michael Bergmann, AMG’s co-founder and economist, referring to the decade marked by economic stagnation, high interest rates, financial repression and rampant inflation – better known as stagflation. “Seen it. Done it. Not our first rodeo.”

Bergmann said that although the nation’s mounting deficit is a cause for watchful concern, it is not an immediate threat as America continues dealing with the pandemic and recession.

The news this month is mostly positive:

Until a vaccine is widely available, governments and central banks around the world will likely continue to infuse their economies with cash to keep their nascent recoveries humming.

The United States has pumped about $6.2 trillion into the economy since March, an unprecedented amount that has raised the national debt to levels not seen since WWII. For many, this raises the twin specter of runaway inflation and interest rates last witnessed in the 1970s.

“Extraordinary expansive monetary and fiscal policies have been put in place in the wake of the COVID-19 pandemic to promote eventual recovery,” said Bergmann “So, does that create a problem?

“Well, not right now, but there is an outside chance of a fiscal and monetary hangover down the road.”

Here’s how it happens.

The year 2024 is key, according to Bergmann:

“To avoid runaway inflation,” he said, “the Federal Reserve (Fed) must by then bring the expansion of the money supply under control. That means tightening monetary policy, which likely means raising interest rates.

“The problem is that politicians often have other immediate priorities than paying interest on the public debt, and so oppose monetary tightening.”

Since the end of February, the Fed has flooded credit markets with $2.8 trillion through its normal operations to ensure liquidity.  The federal government has pumped another $2.4 trillion into the economy through four COVID-19 fiscal relief programs.

And both wings of government are not done. While lawmakers are debating additional relief payments to taxpayers, workers and businesses, the Fed’s special lending programs (so-called section 13(3) programs) are just getting underway. They have an announced potential capacity of another $2.6 trillion but actually could go even higher as some are not capped.

But suppose the Fed utilizes the announced capacity and makes no other asset purchases by year end 2021. In that case, the Fed’s portfolio would reach nearly $9.5 trillion—more than twice its level in late 2014 after the conclusion of three explicit quantitative-easing programs following the 2009 financial crisis and ensuing recession.

The ratio of federal debt-to-GDP right now is expected within a few years to exceed the one brought about by World War II. In 1946, the U.S. public debt was 106% of GDP.

But still, this massive spending effort probably will not lead to excessive inflation for several reasons:

But what if a worst-case scenario unfolds through policy missteps or just plain bad luck?

In order to generate inflation, money needs to be spent, and it needs to be spent on goods and services that can’t be supplied in quantities great enough to meet demand at current prices. Currently, demand is being suppressed more than supply, and as the economy opens up it’s probable that the total capacity of the economy will exceed demand.

However, actual production (real GDP) will eventually catch up to capacity (potential GDP). 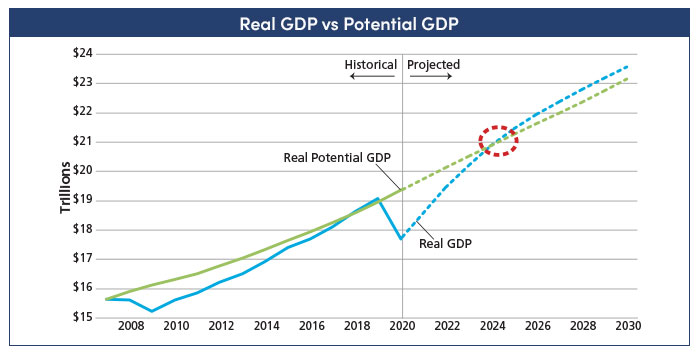 As the graph above illustrates, given the Congressional Budget Office’s estimate for potential real GDP and AMG’s current projection for growth of real GDP, that probably would not occur before 2024.

To avoid runaway inflation, the Fed must, by then, bring the expansion of the money supply under control, which inevitably means raising interest rates. But politicians might not see that as a priority as they seek to keep taxes low and not cut the federal budget.

Currently, the federal funds interest rate is near zero, but Fed policymakers anticipate that the neutral nominal rate of the federal funds rate in 2024 will be in the neighborhood of 2.5%. This isn’t a prediction or rigorous calculation of the average interest rate of federal debt, just a ballpark illustration of the kind of increase that may be called for in the future.

So, facing the prospect of such increases, politicians may have an intense desire to suppress interest costs and liquidate (that is, reduce) the real value of public debt, rather than raise taxes or cut expenditures. This they can do through defaults (including forced restructuring), financial repression, and inflation. Presuming that defaulting on the debt is off the table, that leaves financial repression and inflation.

Minimizing debt costs can be done through acts of financial repression—that is to say, limiting or capping interest rates, capturing a pool of domestic capital, or direct control over parts of the financial industry.

Limits on Interest Rates can be imposed on government debt and can be either explicit or indirect. However, they are not necessarily confined to government debt. Examples include:

Capturing a Pool of Domestic Capital that is encouraged or compelled to direct credit to the government artificially increases the demand for government debt and so lowers its interest cost. This is typically achieved through regulations or tax measures. Some examples include:

Direct Control Over Segments of the Financial Industry. Examples include:

The United States has previously used both inflation and financial repression to ease the government’s fiscal burden of public debt.

As a result of WWII financing needs, public debt topped 106% of GDP at the end of fiscal year 1946. It is often claimed that the debt to GDP ratio was subsequently reduced largely through economic growth—that is, raising GDP. It’s true that economic growth eventually played a role, longer term. However, that was not initially the case.

During the war, the U.S. Treasury Department set a specific structure of returns for Treasury securities with the longest issues capped at 2.5%. The Fed engaged in open market operations to keep Treasury bond prices at par.

As it turned out public debt relative to GDP fell considerably between the end of WWII and the 1970s. An important factor behind the drop was that the growth rate of nominal GDP was higher than the interest rate on government debt most of the time.

It’s interesting to note that government authorities are often reluctant to give up any measure of control over anything. So individual elements of financial repression tend to continue after their stated rationales have ceased to exist. For example:

Mitigating the Impact of Financial Repression and Inflation 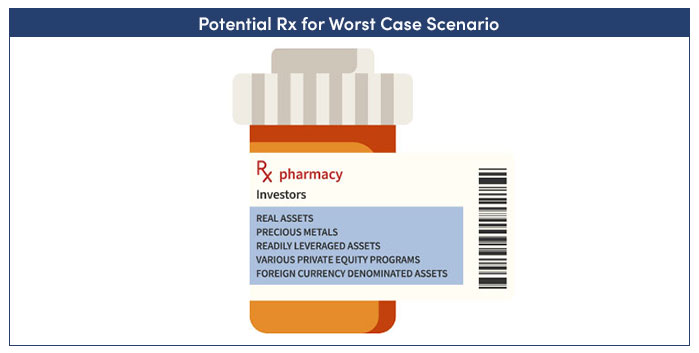 So, where are we? It’s not the most likely, but in a worst-case scenario, continued highly expansionary fiscal and monetary policies have the potential to create highly inflationary conditions. However, these probably wouldn’t rise to the surface prior to 2024.

If they do, the effects will be one or more of accelerating inflation, higher interest rates, and financial repression. The magnitude of any the effects will depend on the economic and the political climate at that time.

There are actions investors can take to mitigate the impact of financial repression and inflation. AMG will be monitoring the financial and political landscape to assess the risks of such potential developments and advise our clients accordingly. Actions could include making investments in:

“We’re not saying this is the likelihood,” AMG’s Wright said.  “We’re saying that if things in 2024 start looking like (the 1970s) … fiscal policies continue to be aggressive and the Federal Reserve doesn’t look it has the answers to what’s going on in the money supply arena, we have to prepared for that.

“We’ve been at this rodeo before, we know what it is, and we’ll be prepared to handle it.