An Honest Look at Global Debt In the years leading up to the Great Recession, developed countries like the United States were responsible for the vast majority of global debt issuance, while emerging economies like China issued significantly less. From 2000 to 2007, global economies issued a combined $37 trillion of household, corporate and government debt, with nearly four-fifths coming from developed countries.1 This buildup of debt—particularly household and corporate debt—contributed to the severity of the financial crisis.

Since the credit crisis began in 2007, the picture of global debt issuance has changed dramatically. Developed economies have taken on large amounts of government debt in an effort to prop up their markets, but have issued relatively little on the household or corporate side. Emerging economies, on the other hand, have significantly increased their issuance of household and corporate debt. Emerging market corporate debt poses particular risks as it often takes the form of external debt owed to foreign parties, which at certain levels can contribute to slower future economic growth, higher inflation, and greater potential for financial crises.

Despite rising global debt levels, record-low interest rates have kept the costs of debt service manageable in most countries around the world. In fact, relative to national income, many countries’ total debt service costs are near historic lows. The ability of borrowers to service and repay their debts is also reflected in low loan delinquency rates, which in developed countries like the United States remain below historical averages across all loan types.

Global debt levels appear manageable in the current low-interest rate environment. However, AMG is carefully monitoring the risks of rising debt in emerging markets like China, as well as the potential for higher global borrowing costs, which would make debt more expensive to service. In the United States, growing U.S. budget deficits in the coming years and expectations for rising inflation could lead to higher interest rates across the domestic economy, reduced availability of credit to the private sector, and eventually slower economic growth.

In this context, AMG recommends investors be selective amongst non-China emerging markets and consider the potential impact that rising long-term interest rates and inflation expectations could have on domestic monetary policy and the U.S. economy going forward.

Since then, developed countries have taken on government debt in an effort to stabilize their economies, while emerging countries3 have issued large amounts of household and corporate debt. In spite of rapid economic growth (as measured by gross domestic product—GDP), emerging markets have increased their total debt-to-GDP ratio by 70 percent over the past decade (Figure 1). 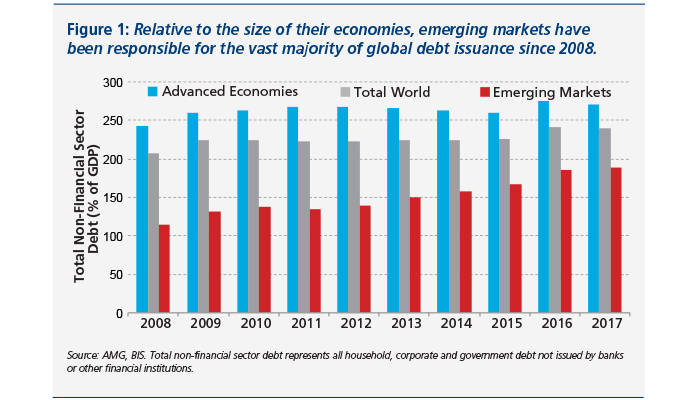 The Type of Debt Matters

According to a 2014 study from the Federal Reserve Bank of San Francisco, the amount of government debt outstanding in a country is important in determining how its economy recovers from a financial crisis, but buildups of household and corporate debt have historically contributed to financial crises in the first place.4 Thus, while emerging markets have issued a significant amount of total debt relative to the size of their economies in recent years, the high proportion of household and corporate debt raises particular concerns (Figure 2). 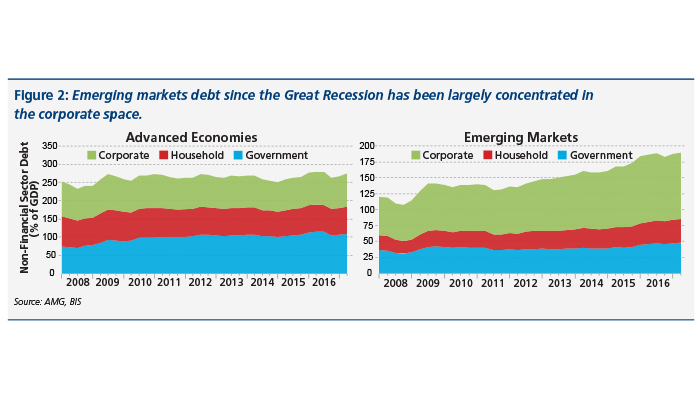 AMG believes that China is also a potential concern. While China holds relatively little external debt relative to its GDP (just over 13 percent as of 2016), its total outstanding debt increased from less than 150 percent of GDP ten years ago to more than 250 percent as of June 30, 2017. Of this amount, over 200 percent was attributable to household and corporate debt alone. It is worth noting that a significant share of corporate debt in China is issued by state-owned enterprises, which are backed by the Chinese government and thus have a much lower risk of default. Nevertheless, and in spite of China’s strong economic growth and ample monetary reserves, the country’s debt buildup could eventually lead to further need for regulatory reforms and slower future economic growth.

While rising debt levels do present risks to the stability and growth of economies, what ultimately matters for the health of the financial system is borrowers’ abilities to service their debts (pay interest and principal on time). Since the recession, global central banks have pushed interest rates to record-low levels in an effort to stimulate borrowing and lending in their economies. These record-low interest rates have also allowed borrowers to take on more debt than they would otherwise be able to by keeping the cost of interest payments low. 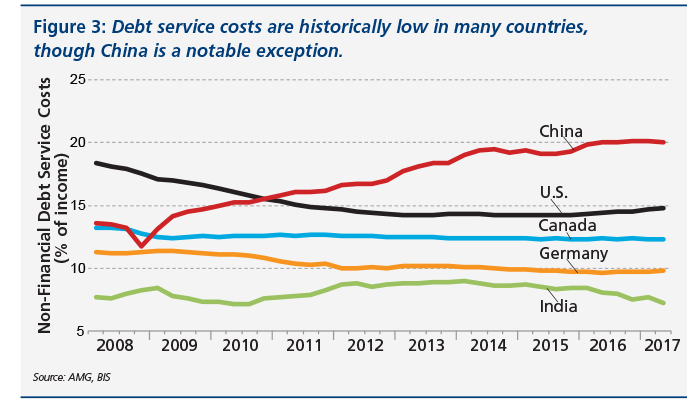 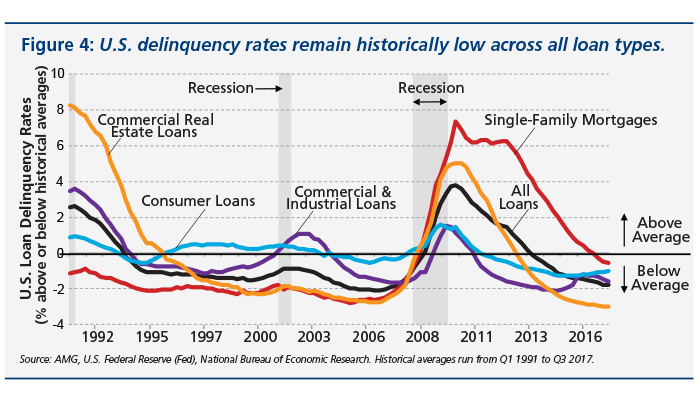 Ultimately, the impact of rising global debt levels has been dramatically lessened by record-low interest rates, which have also helped keep delinquency and default rates low. Even in emerging markets like China, AMG does not believe there is an immediate risk of a credit crisis as a result of elevated debt levels. However, this may all change when global interest rates begin to rise.

In the United States, the Federal Reserve (Fed) began slowly increasing its short-term Fed Funds rate in December of 2015. The Fed Funds rate encourages or discourages overnight lending amongst banks and sets a benchmark for short-term interest rates across the U.S. economy.

In reality, market interest rates like those on mortgages and corporate bonds are more often based on long-term interest rates, such as the benchmark ten-year Treasury yield. An increase in the ten-year Treasury yield has the ability to raise borrowing costs across the entire U.S. economy and can directly impact the financial health of domestic households and corporations. Long-term interest rates only loosely follow the Fed Funds rate and tend to be more subject to market forces, including the supply of and demand for U.S. debt, demand for the U.S. dollar, and expectations for future growth and inflation.

Inflation expectations have moved higher in the United States since late 2017, which has helped lift the ten-year Treasury yield to levels not seen for four years. Recent U.S. tax cuts, protectionist trade policies, and plans for future infrastructure investment have all contributed to expectations for faster inflation going forward. Together with growing entitlement spending on Social Security, Medicaid, and Medicare, the tax cuts and infrastructure proposals will also lead to larger budget deficits in the coming years, resulting in greater issuances of U.S. Treasuries. As Figure 5 illustrates, increases in the supply of ten-year Treasuries often accompany increases in the ten-year Treasury yield, and could drive up borrowing costs throughout the U.S. economy. 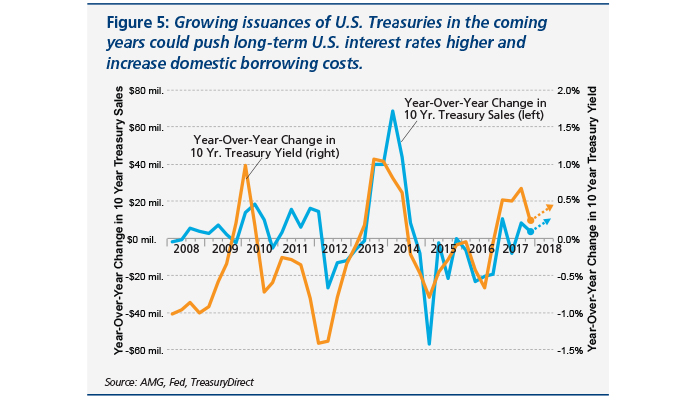 Debt levels currently appear manageable due to record-low interest rates around the globe, but borrowing costs are beginning to rise. The United States has already seen key market interest rates increase, and expectations are that the Euro Area and other major economies may be soon to follow.

In emerging markets, the prospect of higher interest rates and rapid increases in household and corporate debt raise concerns about future growth slowdowns or financial crises. China is one of the most prominent risks given its central role in the global economy.

In this context, AMG believes investors should be selective when investing in emerging markets, as potential debt risks are widespread. AMG also recommends focusing on emerging markets that are relatively insulated from the Chinese economy, because China’s high corporate debt levels and the ongoing efforts of authorities to slow credit growth could threaten its emerging market trading partners. A few countries that may be more insulated from China going forward are Vietnam, India, and Indonesia. Investors should also look for emerging markets with strong current account balances and ample foreign exchange reserves, both of which help provide a measure of protection against financial crises.

In the United States and across much of the developed world, debt has already reached historically elevated levels, but the prospect of rising interest rates presents additional risk. As the cost of debt service increases, the burden of any new or variable-rate debt will increase as well. Ultimately, this could mean higher delinquency and default rates on U.S. dollar loans, a clamp-down on borrowing and lending in the U.S. economy, and slower economic and corporate profit growth.

Ultimately, AMG recommends investors be aware of the potential risks from emerging and developed economy debt in the context of rising borrowing costs and avoid the areas where rising debt levels present the greatest risk to economic growth and stability.