AMG experts examined the progress being made in light of COVID-19’s continuing influence on global markets and the economy.

Click the “Play” Arrow on the image above to view our 4/9 webinar recording.

Brace for even bleaker economic news before the economy stabilizes

The U.S. economy looks dismal, and the outlook for the coming weeks is even dimmer and likely to be depressed for months to come. The COVID-19-related news this week has been desolate:

“The economy is going to go through one awful period in the next quarter with regards to unemployment and GDP – that’s not to be unexpected,” AMG Board Chairman Earl Wright, said April 9 at the company’s COVID-19 economic briefing webinar examining the impact of the global health crisis. (Past related webcasts can be seen on our Research & Insights page.)

Still there is reason for hope: 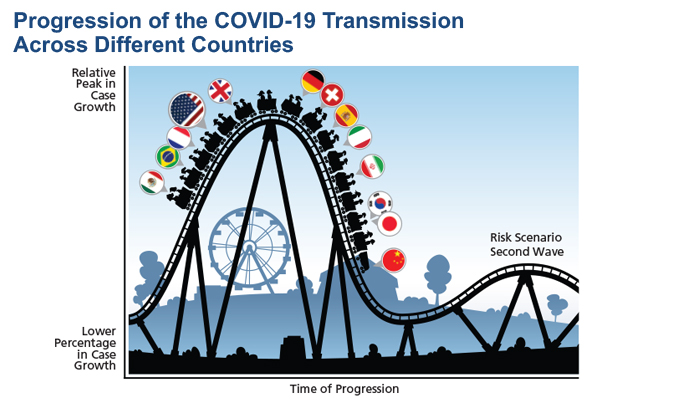 Globally, several countries appear to be past the peak in COVID-19 progression, including hard hit Italy and Spain. China, where the pandemic began, and South Korea have cautiously started to reopen their economies.

“But we do need to be cognizant of the risk of a second wave of infection as time goes on, so it is by no means back to normal,” said Chris Jacoby, AMG’s Senior Vice President of Private Capital.

The United States is still on the climb up in terms of infections and deaths, but the rate of hospitalizations seems to be plateauing. Infections as a percentage of population in New York, New Jersey and Louisiana – among the nation’s hardest hit states – seem to be declining. Colorado, Washington and Illinois might also be near their peaks. Each state is progressing on different timelines and in different fashions.

Social-distancing, shelter-in-place and work-from-home efforts appear to be working in states such as California that instituted the practices early. Those regions have not seen the skyrocketing infection rates of New York and other early hotspots.

Another bright spot is the scientific and entrepreneurial communities, along with the industrial complex. They are addressing critical needs in the war against the disease. Large-scale manufacturers are ramping up production of medical supplies, including ventilators, testing kits and personal protective equipment such as facemasks. Entrepreneurs are innovating new ways to collect and manage medical data and track the disease.

But perhaps most importantly, scientists and medical researchers worldwide are rapidly expanding programs to find better ways to treat the disease and develop a vaccine. About 190 companies are involved in this quest. Clinical trials are starting on anti-virals to stop the virus’ growth in patients, anti-inflammatories to treat lungs when the virus overwhelms an immune system and plasma transfusions in which blood plasma from COVID-19 survivors is given to new patients in hope of igniting antibodies in their immune systems.

“The ultimate goal is to get to a vaccination,” Jacoby said. “There are at least four distinct vaccines … that are now in, or expected to in the near term, clinical trials.”

Any vaccine will not be widely available until next year, which is why accurate and widespread testing is so important to reopening the economy in the interim. Determining the extent of the virus’ spread is critical. 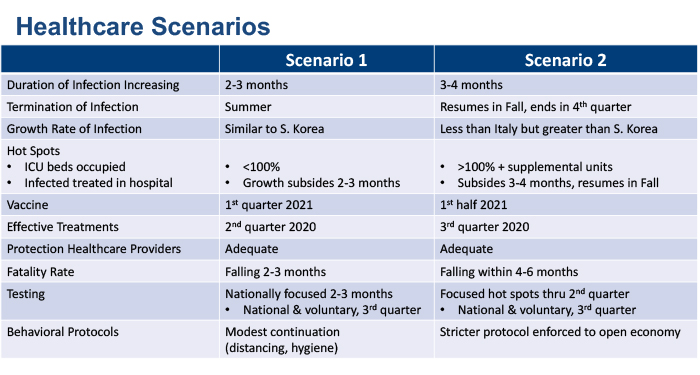 Despite the positive healthcare news, everyone should be prepared to see the economic downturn, which will be discouraging for a time. To that end, AMG has updated two alternative economic scenarios.

“The course of the COVID-19 disease will be the main determinate of the depths and lengths of the economic downturn,” said Dr. Michael Bergmann, AMG’s Economist and Senior Executive Vice President. “And neither monetary nor fiscal policy can prevent a significant near-term drop in economic activity, which I should add is already underway.”

The economic news in the coming months will be ugly, he continued, but long-term economic potential should not be greatly impaired. Personal income and corporate profits eventually will recover to where they would have been anyway because easy-money policies and low interest rates will linger after COVID-19 is contained.

Better days lie ahead, he said, but individuals and small businesses will need additional economic help, especially under Scenario 2.

Over 30.2 million small businesses and their 77 million workers are receiving the first wave of economic help from the new Payroll Protection Program (PPP). Coordinated by the Small Business Administration, banks will provide $349 billion in forgivable loans to qualifying companies to help pay their employees during the COVID-19 crisis. Pay is capped at $100,000 annually for each employee, and 75% of each loan must be spent on payroll costs for the loans to be forgiven.

Lenders nationwide have been swamped with applications since the program launched April 3 and processing has been slow due to system glitches. Applicants have to document their payrolls and then prove how the money will be used. AMG is one of the banks making such loans, and Banking Division President Tom Chesney said current bank customers are finding the loan process becoming more streamlined.

“It is an employee-retention program and not a credit-granting program,” he said, noting that applicants not known to a bank have to provide more documentation. “If it’s a client already known to the bank, then it’s a streamlined process, and then the hiccups are on the backend, trying to work through the SBA program to get the funds out the door.”

The PPP and other government fiscal and monetary policy moves have buoyed stock markets in the past 10 days. Investors in the coming weeks will start to focus on strategies for how and when the economy will be reopened. They want to know which sectors and companies will be allowed to resume doing some business and in which regions of the country. Governors will play a key role in the process. “Much of the strategies for reopening are going to center around (COVID-19) testing,” said Josh Stevens, AMG’s Senior Vice President of Investments. “Each state, each governor may have a different approach to testing.”

Expansive testing will allow states to determine who has had the disease, who has it, who is at risk of getting it, where it’s spreading and where it’s concentrated. Absent a vaccine, tracking the disease is critical to reopening the economy. A test that provides results in a short time is essential, like the one developed by Abbott labs and recently approved by the FDA – it works in less than 15 minutes.

“That might mean that eventually, we can go back to going out to a restaurant, going out to a ballgame, going back to work … doing all of that without a vaccine,” Stevens said.

Investors also will look at whether the healthcare system is expanding so it can handle a potential second-wave of infection, and the risk of that happening. Right now the U.S. is increasing its number of hospital beds as temporary facilities are set up in convention halls, hotels, and tent stadiums.

“That’s what the market wants to see to establish that we won’t have to shut down again,” Stevens said. “The risk of a second wave impacting the economy in the way the first one did is being lessened.”

Although the economy has yet to hit a trough, AMG believes the bear market is starting to bottom out. Unfortunately, the process could last six to nine months with lots of volatility before a sustained climb begins.

Investors should watch for opportunities as they rebalance portfolios to strategic long-term positions in global equities. Then later likely overweight global equities when markets bottom out and the economy hits its trough.