Oil Pricing and the COVID-19 Crisis

Click the “Play” Arrow on the image above to view our 4/23 webinar recording.

Oil prices are likely to stay subterranean for months, despite some U.S. states tiptoeing this week toward easing COVID-19 restrictions and reopening their economies.

“One out of 10 supertankers we have in the world is floating in the ocean full of oil that can’t be sold,” AMG Chairman Earl Wright said during the April 23 Insights Webinar on the pandemic’s economic impact. Click here to watch the video.

The webinar offered AMG research and analysis on a number of developments:

Petroleum storage facilities everywhere are full because of the oil glut. Demand has dramatically fallen because people aren’t traveling while following social-distancing, shelter-in-place, and work-from-home directives. That’s a problem for energy companies because around 60% of oil consumption is in transportation. The oil and gas sector accounts for 8% of U.S. GDP, and 7% of U.S. jobs are energy related.

“They can’t make money,” Wright said, noting that the $20 a barrel price is well below the $30 break-even point for the most productive and cheapest oil region. But an even bigger problem looms for the industry. Energy companies account for about 15%, or $1.22 trillion, of the high‐yield‐debt market, and $13 billion of it comes due later this year. If oil prices don’t rebound, smaller operators won’t be able to refinance and will likely go out of business as drilling stops and existing wells are plugged.

That’s part of the reason oil-rich states like Texas want to reopen their economies sooner rather than later — to get consumer spending and oil consumption going again. 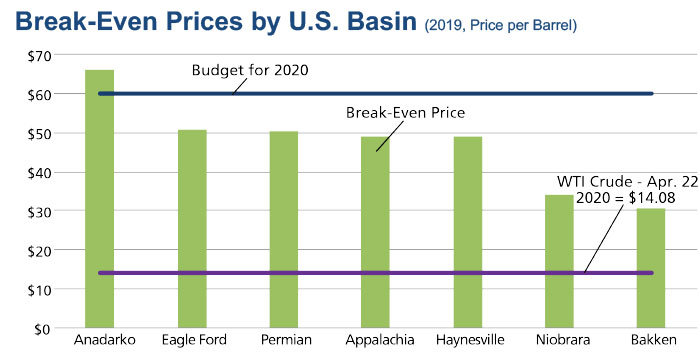 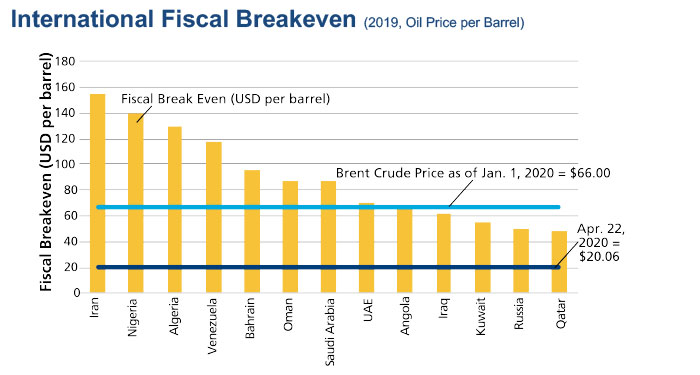 Internationally, whole nations are suffering because oil exports account for 50% or more of their GDPs and pay for extensive social programs. AMG board member Chris Hill, a former U.S. ambassador in the Middle East, pointed to Iraq as a country in trouble; about 95% of its economy is derived from oil.

Every dollar in lost oil revenues is nearly a dollar that can’t be spent on social programs for the people, like free electricity.

“The riots that we have seen in Iraq, which have really helped usher out a couple of governments just in the last year; we can expect those to continue,” he said.

The oil crisis erupted in early March when Russia refused go along with Saudi Arabia’s call to cut production and bolster prices in response to falling demand, which plummeted as the pandemic swept through the world and forced most countries into economic lockdown. The two nations, and the entire Organization of Petroleum Exporting Countries (OPEC), have since agreed to cut production by about nine million barrels a day, but global consumption has dropped by nearly 20 million barrels.

“The Russians have a foreign policy that is often determined by spite toward the U.S.”

Some 65% of Saudi Arabia’s GDP comes from oil exports, while Russia’s dependence is estimated at 50%. Hill said the Saudis should win this dispute because they have vastly greater oil and financial reserves than Russia.

But still, oil likely will continue selling below the breakeven point for months to come, and that will likely raise tensions in countries dependent on oil exports to fund their governments and provide services to their people.

“We can be concerned that there’s going to be more social unrest – in the Middle East in particular,” Hill said. “It’s going to be very challenging for all the governments to manage this.”

Iran, already suffering from U.S. sanctions on oil exports and one of the world’s early COVID-19 hot spots, will hurt even more because of the price crisis. But Hill said he doesn’t expect the nation to capitulate to American demands it cease its nuclear program.

“The Iranians … have no intention of giving in,” he said, noting that he expects negotiations will not occur until after the U.S. election in November.

“The Iranians simply don’t trust us.”

Asian countries that started reopening several weeks ago are closely monitoring for a second wave of infection. China and South Korea continue to see low numbers, but Singapore and Japan have experienced troubling surges.

“Singapore is seeing a true rise in case numbers with over 1,000 new cases per day for the last week,” said Chris Jacoby, AMG Senior Vice President, Private Capital. “This has been driven partially by ex-pats returning … but more significantly, it’s the result of a rise in the migrant worker population where social distancing is more difficult given tight living quarters.”

Meanwhile, several European countries, including Germany and Austria, are getting back to business, albeit cautiously with smaller enterprises allowed to reopen with social distancing requirements.

In the United States, even the hardest-hit states seem to have plateaued. Social-distancing, shelter-in-place and work-from-home efforts seem to have dampened the disease’s wildfire spread.

“Many states are beginning to plan for a slow, gradual reopening,” Jacoby said. 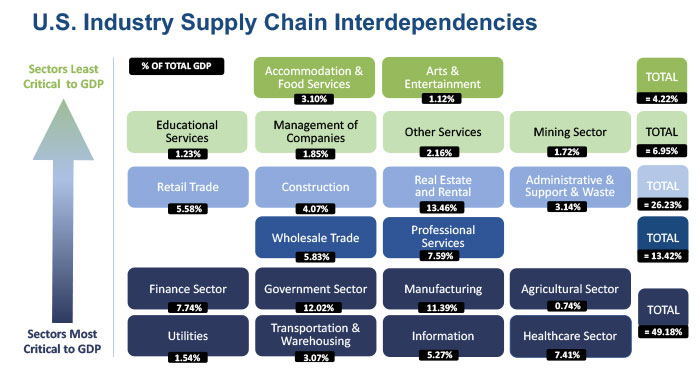 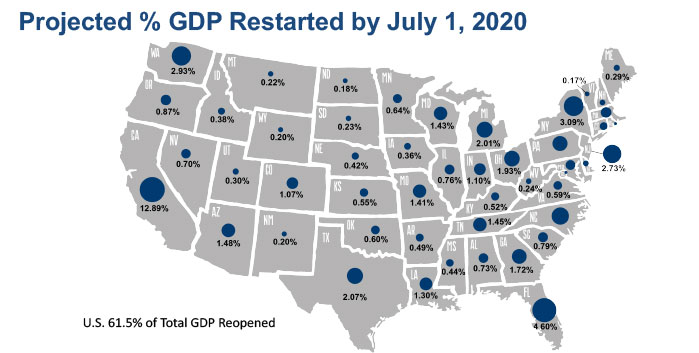 The U.S. government has issued guidelines for states to reopen their economies. Right now, only companies considered essential to the U.S. economy are allowed to operate. They normally account for nearly 50% of GDP, but the economy is only running at 20-30% capacity. Using the federal guidelines, several states – including Texas, Georgia, and Tennessee – this weekend will start reducing stay-at-home restrictions and allowing some non-essential businesses to resume some operations.

As other states follow and if there is no dramatic resurgence of the disease, companies representing 61.5 % of GDP could reopen by July 1, according to AMG statistical modeling. If the pandemic remains in check, the number could hit 80% by September and 100% by Dec. 31.

“How governors handle the opening of the economy by industry and geography will impact how quickly GDP begins to grow again,” said Julio Fernandez, AMG’s Global Quantitative Analyst. “Each governor will look at his or her own considerations for their state and regional coalitions.”

As for the global outlook for recovery, the International Monetary Fund recently painted a grimmer picture than it had earlier. Weak conditions in the wake of the COVID-19 crisis are widespread, and the IMF projects global economic output to fall 3% this year, far outsizing the 0.1% contraction during the 2008-2009 recession.

Output declines will be steep for emerging and developing economies, as well as advanced ones. IMF projections of GDP declines include:

“If the IMF projections turn out to be in the ballpark,” AMG Economist Michael Bergmann said, “the resulting silver lining is that central banks around the globe – not just the Fed – are going to be conducting some very easy monetary policies from some time to come.”

That means global markets will be swimming in liquidity, and interest rates will be low for the next few years. And that likely will create conditions that could help push up prices for stocks and other risk assets, Bergmann said.

The poor outlook for the immediate future has prompted many companies to stop issuing “guidance” for future earnings, said Josh Stevens, Senior Vice President, Investment Group. Second-quarter earnings reports are expected to be dismal for most companies because of the pandemic lockdown.

But if the reopening of the U.S. economy continues without a significant second wave of infection, he said, “there’s a chance a good portion of the economy recovers quite quickly.”