Looking Ahead at COVID-19 & Beyond

In the third Insights on the Economy webinar, AMG experts provide new insights and perspectives about the evolving COVID-19 situation, and what the future might hold.

Click the “Play” Arrow on the image above to view our 3/31 webinar recording.

Webinar Summary: Beyond the COVID-19 Pandemic

Assessing the crisis and what the future holds

These moves have smothered a massive chunk of the U.S. economy and will continue to do so at least through the end of April as most of the nation hunkers down at home trying to halt the disease’s spread. Nearly 10 million Americans have joined the unemployment rolls in the past two weeks as most hotels, restaurants, retail stores and other non-essential businesses have been shuttered.

But it’s not all gloom and doom. Rays of sunshine are breaking through, offering hope for the health, safety and economic well-being of all Americans. The good news is:

Those were the highlights of AMG’s March 31 Insights on the Economy webcast, the third in a series of digital webcasts aimed at updating clients on the latest economic developments related to the pandemic. Videos of all three webinars are available from our Research & Insights page. 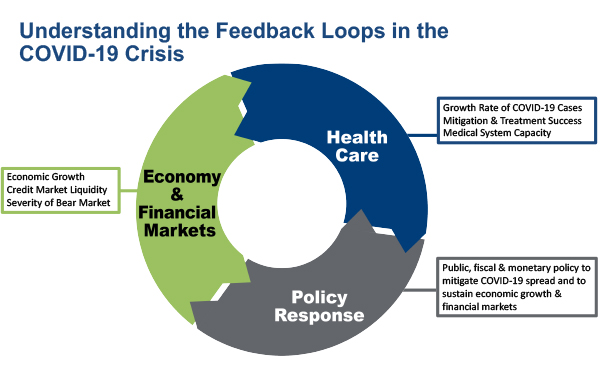 AMG researchers see three major factors at play in this crisis, a feedback loop among the healthcare efforts to mitigate and contain the virus’ spread, the fiscal and monetary policy responses of governments at all levels, and the economy and financial markets reactions to the pandemic and government responses. A development in one portion of the loop directly impacts the other two segments.

Doctors and scientists are racing to mitigate and contain the COVID-19 pandemic before it overwhelms America’s hospital system. Keys to this are providing adequate testing kits so the outbreaks can be tracked, training healthcare workers to effectively treat patients, providing safety equipment (masks, gowns and gloves), and finding enough intensive-care beds and respirators for the expected patient load. All of these things are in short supply.

Earl Wright, AMG’s board chairman, pointed out that infectious disease experts are cautiously optimistic that the New York outbreak might be peaking as the rate of new infections appears to be slowing. However, scientists are concerned about other hot spots erupting in Boston, Newark, Washington, D.C., Miami, New Orleans, Detroit, Chicago, and Los Angeles among other cities. Following social distancing rules is essential to slowing outbreaks until better treatments are developed.

“The next three to four weeks will be tough with regards to the growth in infection rate and hospitalization rate in various hotspots around the country,” Wright said.

Promising anecdotal evidence is suggesting doctors might be finding effective treatments using several anti-viral drugs already on the market. Other techniques, such as blood infusion from COVID-19 survivors, also might prove useful.

While the Federal Reserve Board has utilized monetary policy liberally by cutting its interest rate to nearly zero and promising to keep credit markets liquid, it is limited in what else it can do to stabilize the economy. So the federal government acted on March 27, signing into law the CARES (Coronavirus Aid, Relief and Economic Security) Act.

Dr. Michael Bergmann, AMG’s economist and executive vice president, pointed out that the new $2 trillion stimulus package provides both fiscal relief and behavioral incentives for households, businesses and hard-hit sectors of the economy. The act provides $550 billion for cash payments of $1,200 to adults (income limits apply) and $500 per child, and increases and extends unemployment benefits. The law provides small businesses with tax credits, payroll-tax deferments, and a $350 billion forgivable-loan program. CARES also provides $454 billion in a lending program for corporations, states and municipalities, as well as an additional $46 billion in direct loans for air carriers and businesses important to national security.

“It really may shorten the economic recovery time after we get COVID-19 contained,” Bergmann said. “But it can’t prevent a significant drop in economic activity that we already have got going on.”

To that end, AMG has revised its two economic scenarios that could play out in 2020 as the pandemic runs its course:

Scenario 1 – Mitigation efforts are successful and the virus is contained within a few months.

Despite the gloomy short-term economic outlook, U.S. stock markets have rebounded in recent days, recovering 17-18% of lost value after the historic March free fall, and bond-market volatility has stabilized.

Going forward, a lot depends on what happens in April. Markets will be assessing how well efforts to contain and mitigate the pandemic are working, how quickly government relief is delivered and what corporate profit reports show.

AMG sees the bear market bottoming out in mid to late summer, and after doing so, providing rare investment opportunities. Markets will look monstrous, data will seem dismal, and earnings will be evaporating. When the time comes, investors should consider rebalancing portfolios toward global equities, including U.S. stocks, with a focus on long-returns. Small-cap stocks also look promising.

“That’s absolutely the time when you need to have courage is when things look the worst,” Stevens said.